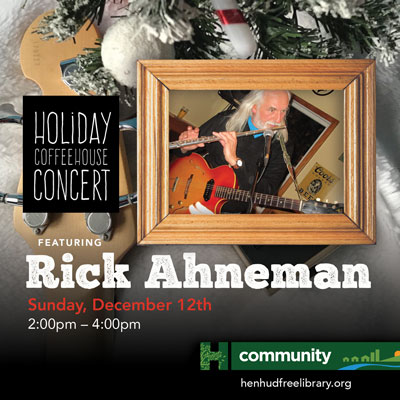 Join local singer/entertainer Rick Ahneman playing guitar and flute for a selection of holiday music plus much more in our coffeehouse setting. Masks must be worn, no reservations necessary.

Rick Ahneman studied flute, guitar and voice, was a member of classical and jazz ensembles, and sang in musical theatre. He studied both French and Spanish languages, afterwards working his way with guitar around France, Spain and Scandinavia, singing on cruise ships, in public squares and along terraces of cafe and restaurant.

To further his artistic talents, he studied acting at the American Academy of Dramatic Arts and earned his Master of Arts Degree in theatre at Hunter College of the City University of New York. As a choral singer, he has appeared at such prestigious landmarks as the Metropolitan Museum of Art and Carnegie Hall.